A few days ago we were worried about crossing western NM and eastern AZ, and remarking on the desolate desert landscape. What the hell did I know, innocent Easterner? That was a trip through green pastures compared to today.

Leaving charming Williams, AZ after breakfast we rapidly descended from 7,600 ft to less than 400 at the Colorado River. The terrain changed and changed again, from tall pines to arid red rocks to scrub desert as we spiraled down out of the high land of the Colorado Plateau.

Seeing a watery wildlife refuge, we exited Route 40 just before the California line. Tango got to wallow in water from the Colorado that fills Goose Lake, a huge wetland surrounded by white sand desert. It was hot and windy, and a very strange place. Even a few dozen yards from the water and the landscape was unforgivingly harsh. Still, there was the scruffy town of Topock there, touting its recreational benefits.

After lunch we excitedly crossed into the Golden State and began climbing uphill again. Soon it was apparent that we were in a monumental desert world. The adjective ‘lunar’ worked its way into the conversation. Almost all the greenery disappeared and the colors grew muted. Some cactuses, a few small yuccas, tumbleweeds. And rocks, sand, wind.

Mountains were toothy and varied in color and form. Sometimes there was a totally black mountain. Later we saw more ‘malpais’ – recent lava erruptions of grainy black stone. There were no signs of life, no living things, no houses or power lines. For dozens of miles.

The Mohave Desert is over 25,000 square miles of daunting desert, stretching from Vegas into Arizona and California. It felt like the surface of Mars, only less colorful. It’s the first landscape where I couldn’t imagine surviving on my own. I like to think I am comfortable in the wilderness. But this environment was deeply hostile in my book, despite the long list of creatures who live there.

Jose and I have been on the road for over 3,200 miles and ten days. We’re tired, and so is our vehicle. Today, while watching the engine light and the temp gauge, one strap holding the bicycle broke, fortunately we caught it before it got completely loose. Later, in 30+ mph winds the cartop carrier began rattling ominously, so again we were on the hot, windy and dangerous highway fussing with straps and buckles to cinch it tighter.

After the blasted feeling of the Mohave, climbing up into the Tehachapi pass with all its windmills was exhilarating. But then the high winds had whipped the dust into a haze, and the sun was low. All those twirling pinwheels spinning on the mountainsides were mesmerizing.

After that, the rugged hills softened to a leathery tan, more green appeared and livestock to dine on it. Trees other than Joshua were a sight for sore eyes. And when we hit the first orchards in Caliente, it was like being in candy-land. The colors were so intense! 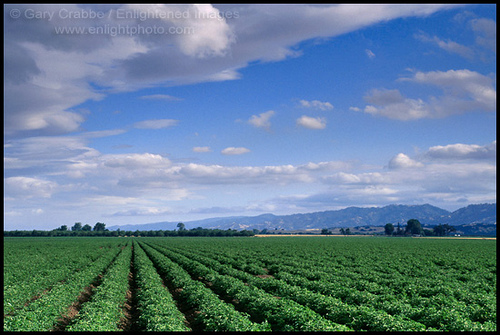 Here in north Bakersfield The air smells of flowers and manure, and its relatively humid. there are vineyards and orchards just outside of town, and they will line our route home tomorrow, the Garden Basket of the US.

Welcome to California, a huge, strange, rugged, lush state. What a first day!!

Thanks everyone for following along on this wacky adventure. There are many more tales to tell, and tomorrow, more miles to go. Stay tuned!

1 thought on “Day 10: Welcome to California”