Singing this song as a young person always brought a heartwarming scene of happy elders, together after all these years. With no clue about what was to come! I couldn’t have anticipated the bumps along the road from 24 to 64. But here I am, well into “the new 40” recently thrust into early retirement. Well, there’s another concept I can’t quite identify with! I’m still voraciously curious, wanting to eat up the beauty of the world. 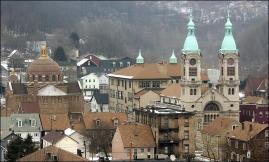 In October I moved from Maryland to central Pennsylvania. Now I live with my longtime friend Mark, who returned to his hometown a few years ago. He welcomed me with 3 cats, an awesome generosity! My new tiny town has no traffic, dozens of mom & pop diners, old wooden houses marching up and down ancient hills. Alas, there is no Trader Joe’s, no Vietnamese restaurant, and not enough Uber business. But it has trains rumbling through the night, and church bells that ring! I am surrounded by forested hills with rocky-toothed crowns, filled with deer and bear and bobcat. And it SNOWS!!!! I can tell this is my new happy place.

In the throes of relocation I had to say goodbye to my beloved companion, Lily, the most loving (and the most difficult) dog I’ll ever know. I carry a dog-shaped hole in my heart, and being back in Maryland for a bit, she is everywhere. I love you Lily, and I always will.

So happy birthday to me, who once sang (with gusto) “Hope I die before I get old!” I changed my mind. I’m curious to see what time will bring at 64 and beyond.

A poem for today:

Does the road wind up-hill all the way?
Yes, to the very end.
Will the day’s journey take the whole long day?
From morn to night, my friend.

But is there for the night a resting-place?
A roof for when the slow, dark hours begin.
May not the darkness hide it from my face?
You cannot miss that inn.

Shall I meet other wayfarers at night?
Those who have gone before.
Then must I knock, or call when just in sight?
They will not keep you waiting at that door.

Shall I find comfort, travel-sore and weak?
Of labour you shall find the sum.
Will there be beds for me and all who seek?
Yea, beds for all who come.

The day after was perfect day: palmettos rustling in the light breeze, ducks chattering on the ‘lake’, rippling patterns on the stucko wall. He would have gone down to feed them.

My brother stumbles into the kitchen, rumpled, stubbly, and rubbing his eyes.

We sip our wake-up drug for a while. Could be a scene from any south Florida morning. Except:

“We should call people.”

I nod. Hand him the phone.

He stares at it for a while.

“I’ve forgotten my own phone number.”

He looks up at me, and the incredulity, plus the grief on his face make him look like an old man and a little boy, all at once.

I start to recite his number for him and realize I don’t remember it either. I shake my head, dumbfounded. We’re not quite ready to laugh.

After Dad’s funeral, there was the business of getting life back to some semblance of normal. For weeks life had been waves of surreal, from the miserable conflict with second wife Mary, to moving into hospice, and finally his mystical passing. We then faced the challenge of organizing his wake in another state. I felt tumbled like a stone, no more sharp edges, and not knowing which way was up.

After all was said and done, I headed home to DC. I had something great to look forward to: the opening of a gallery show on Capitol Hill. I was never so proud of my work – it looked marvelous, drew lots of praise, and I sold painting. It couldn’t have been a better moment to celebrate with my fellow artists, neighbors and art fans. Time to launch a new season, a new Millennium, and the strange new life without my father.

The day after that opening was another perfect day, this time, the September-in-Washingtonian kind. Who doesn’t love the blessed return of moderate temperature and low humidity, the arching bowl of blue sky without a cloud, with the trees still green and full? It made me want to reach up, stand tall and hope.

I met a friend by the river for some optimistic early-morning exercise. We were both on course for a great new season of success, rebuilding momentum after summer’s travels. I went off on my bike while she walked.

West Potomac Park has waterfront sidewalks, some of which flood at high tide. Did you know that goose shit and algae make a slippery surface? Right across the river from the Pentagon, my wheels went out from under me. Sliding sideways I skidded along the slimy concrete. Somehow I made it back to the car, gashed, bleeding and smeared with a vile substance.

My friend took me home and helped me get cleaned up, tended my wounds. And thus I was not at work, but home when my cousin called, about 9:40am, nearly shouting:

He lives in Michigan.

I puzzled at the phone, smiling.

I comply, his voice was so commanding. And I stared in disbelief. I thought it was a bomb.

My father died as predicted, as comfortably as possible with loved ones near. It had nothing to do with horrific terrorist havoc.

But losing a parent feels like the rug is pulled out from under you. The world goes wobbly, what seemed solid thins and becomes crumbly, transparent. Brick buildings that looked solid sag as if made of sand, just waiting for a gust to blow them down.

The walls came tumbling down. It’s a different world now.

The ancient cross-quarter harvest feast of the season, Lammas or Lughnassa, corresponds to Late Summer, (one of five that Chinese medicine recognizes*).  The frenzy of early summer has to ripened and paused, the grain harvest has begun, and the first signs of autumn are upon us. Birds gather on a wire, cricket voices are a deeper chorus. We gorge on tomatoes and sweet corn, complain about too many zucchini. I feel a deep, rich melancholy sweetness this time of year, and it’s affecting the music I want to hear. 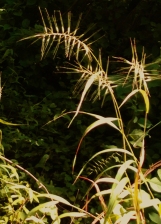 As a Wiccan descended from Czech peasants the deep and ancient pull of the turning earth still calls my blood.  Can you feel it? There’s a ripeness and a waiting, and a strange sadness that accompanies the harvest wealth. There’s an ancient poem about this, handed down to us by Robert Burns, recorded as a song in 1970:

It’s remarkable how in the poem we identify with the barley plant: his green youth, golden maturity and painful demise (and creative revenge!) These days busy humans seldom pause and consider the life of the other beings around them, particularly if they are plants!

In my younger life the calendar was driven by the school year. August was a season of intense and conflicting emotion: time to grieve summer’s delirious freedom, the looming loss of my summer love. At the same time I was alive with anticipation, and dread, for the coming school year. There were summer songs that so captured this:

Summer loves no longer come and go as they once did, but the turning time still brings that thrill of change to come. Such an ancient thing, riding the cycle around again, grieving for the innocent joy of sweet spring, giving thanks for the bounty we feast on, and trepidation for the harsh winter to come.

I’d love to hear your stories of this season, the joyous, the bittersweet, the wheel of time milling us like grain. (Please comment, email or link to your reply. Sharing is love.)

*Earth: the in-between transitional seasonal periods, or a separate ‘season’ known as Late Summer or Long Summer – in the latter case associated with leveling, dampening (moderation) and fruition. from http://en.wikipedia.org/wiki/Wu_Xing